Enclave Key is a signature key generated and managed by the key manager in Enclave. ELC uses this key to sign a commitment to create a signature as a commitment proof. An on-chain LCP client verifies this signature. This document refers to an Enclave key's public key as a public Enclave key.

Enclave Key generation is performed on execution of InitEnclaveCommand by App immediately after LCP Node startup. The generated key is encrypted in the LCP Node using the sealing function provided by SGX and then stored. When restarting the App, the stored key is unsealed and reused. It uses the MRENCLAVE policy as the sealing policy to prevent the reuse of the key encrypted in the previous version when restarting after updating the LCP Enclave.

The signature algorithm of the Enclave Key can be configured to avoid the unnecessary addition of precompiled contracts on EVM. Currently, it supports ECDSA with the secp256k1 curve as the signature algorithm. sgx_read_rand (internally use RDRAND op) can be used to obtain a seed value that no one can read from outside the Enclave. The Enclave Key is generated based on this seed.

The remote attestation process must be performed every time a new LCP node is started or upon an Enclave key is updated.

The following figure shows the flow of generating an Enclave key and obtaining an Attestation Verification Report (AVR. cf. https://api.trustedservices.intel.com/documents/sgx-attestation-api-spec.pdf) for a Quote using IAS: 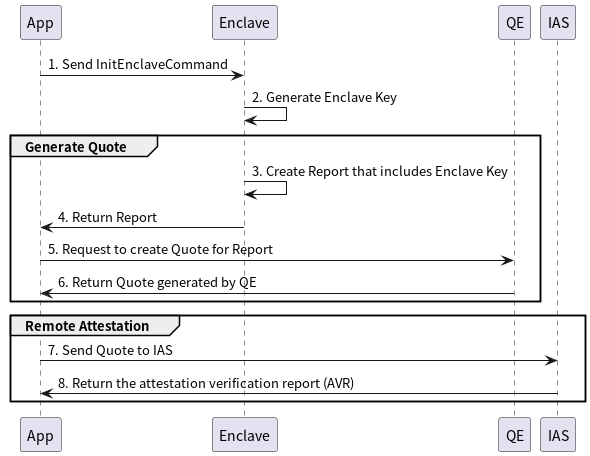 The details of each step in the flow are as follows:

Note that the following steps are necessary only when using an external attestation service such as IAS, etc. In the case of ECDSA Attestation using DCAP, the Quote obtained in step 6 should be an externally verifiable Quote.

The LCP client uses the resulting Verifiable Quote (AVR) to register the public Enclave key. Details of this process are described in RegisterEnclaveKey.